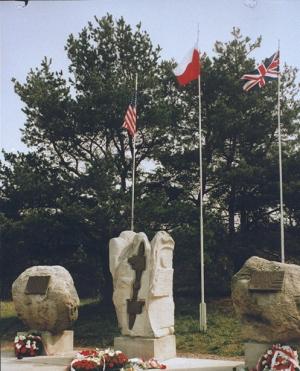 The unveiling of the Luft IV Memorial, at the center of what remains of the Camp site, was the culmination of true international cooperation. The first attempts to recognize the importance of the site began ten years earlier, with a sign placed at a nearby crossroads. In 1988, a large stone with a bronze plaque was placed near the center of what remained of the camp.

Shortly after Lech Walesa was elected as President of Poland, he visited the United States. Through the efforts of Joseph Odonnell, a former Luft IV POW from New Jersey, President Walesa was approached with a packet containing a survey of the camp, photos and an American flag. A formal request was made for the Polish government to consider setting aside this area for posterity. His answer was: To Nictakiego. No Problem!

On May 31, 1991 President Walesa authorized the construction of the monument. A Polish committee was formed and plans began to materialize. A noted Polish Sculptor, Zygmunt Wujek was retained to execute the design. In 1944, the 243 acre pine forest had large open areas where the compounds were erected. Now grown over, the areas around the remaining stone barracks foundations needed to be cleared of brush. A kitchen foundation for Lagar A was exposed along with the fire pool adjacent to it. Artifacts were collected and assembled at the nearby Agricultural school, which was tasked with maintanance of the area.

Meanwhile, an American committee was formed to coordinate with the Poles. George Guderley, William Cupp, Joseph Odonnell, Greg Hatton. Len Rose and Claude Watkins were instrumental in alerting the known survivors of the camp, raising funds, assembling accurate background information and organizing a trip back to Luft IV.

George Guderley, Major, USAF ret. represented the former POWs at the dedication and unveiling. He was the keynote speaker. The local population turned out in force to see a 60 man Polish Air Force honor guard, a MIG 23 flyover and a full military band.

On May 2, 1993 the first group of thirteen former prisoners from Luft IV returned to Tychowo (formerly Gros Tychow). After a ten minute stop at the Podborsko train station (formerly Kiefeheide), they boarded their tour bus and proceeded two miles to the plaza upon which the new monument had been erected. The were welcomed by several dozen authorities and local families for a short ceremony.